Javanese letter has an International recognition from Unicode, a body under the UNESCO on 2 October 2009.

This recognition got after Ki Demang Sokowaten from Yogyakarta listed the Javanese Letter to Unicode on 9 September 2007.

What is the Javanese Letter? Below is a brief story about that.

Once upon a time, at Medang Kawit rural, Majethi village, Central Java, living a handsome supernaturally fighter named Aji Saka. He has a heritage Keris (Javanese traditional dagger) and supernatural turban or head-cloth.  Beside he supernaturally, he is also diligent and humble, he always helping his father in the farming, and also helping other people who need his help. Everywhere he go he always accompanied by two of his servant, Dora and Sembada. 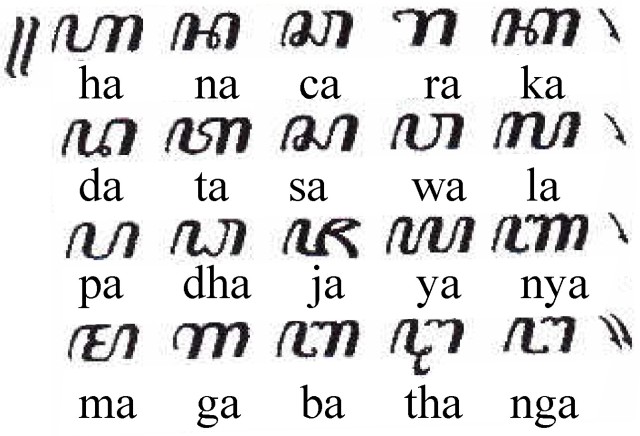 One day, Aji Saka asking permission to his father to go wander with Dora.  And, Sembada instructed to go to Kendeng mountain to bring his heritage keris.

“Sembada! Bring this keris to Kendeng mountain. You should take care carefully and do not give to anyone until I myself taking that!” order Aji Saka to Sembada.

“Yes Sir! I promise to carefully to take care of your Kesir, Sir!” said Sembada.

After that, Sembada leaving to the north direction to Kendeng Mountain, and, Aji Saka with Dora go to the south direction.  They didn’t bring any spare cloth beside the cloth they used. After walking for a half day, they arrive in a forest.  When they want to pass that forest, suddenly Aji Saka hears somebody shout asking for a help.

Aji Saka and Dora soon goes to the direction of that voice, within the short time they found a mid age man has beating by two robbers.

“Hay, stop that!!” Aji Saka shouts to the two robbers.

But the two robbers ignoring Aji Saka shout, they still beating that man.  That is makes Aji Saka angry. As fast as possible Aji Saka kicked to the head of both robbers till they drop to the ground and collapse.  After that Aji Saka and Dora approaching that mid age man.

“Sorry Sir! If you do not mind, we want to know where are you from and why that you in the middle of this forest?” said Aji Saka.

Then the man tell a story that he is coming from Medang Kamukan state, he run away because the King of his country named Prabu Dewata Cengkar  is a cannibal.  Every day he eats one human that given by his obedient, named Jugul Muda.  He is so afraid to the next victim, he and many others citizen run away to other places.

Aji Saka and Dora surprised hearing the story tell by that man..

“This story is! A hobby of Prabu Dewata Cengkar of cannibalism began when a chef of the palace accidently cut the finger, and then the cutting finger goes to the sup bowl that prepared for the Prabu.  And accidently the Prabu eat that finger and he likes with the taste. Since then the Prabu become likes eat a flesh of human, and he became cruel,”  the mid age man explained.

Hearing that explanation,  Aji Saka and Dora decided to go to Medang Kamukan. He wants to help the people of Medang Kamukan from the cruel of Prabu Dewata Cengkar. After  walking day and night passing thru the forest, across the river and climbing the hill, finally they arrive at the capital of Medang Kamukan kingdom. The situation is very quiet, like a death city.  There is no one shown on the street, the entire house door are close.  The citizens doesn’t want to go out from the house because they afraid to be the next victim of their king.

“You wait outside! Let I’m alone going inside the palace to see that cruel king,” said Aji Saka strictly.

With full confident, Aji Saka walked to the palace.  The situation surround the palace also very quiet, there are only several guards walk across the gate of the palace.

“Stop, young man!” ask the guard when Aji Saka arrive at the gate of the palace.

“Who are you, and what do you do here?” ask the guard again.

“Hi, young man, did you not afraid of him?” said another guard.

“Let you know gentlemen, my purpose to go here is to surrender myself to the king for him prey,” answer Aji Saka.
The guards are surprise hearing an explanation of Aji Saka. Without many question, they permitted Aji Saka to go inside the palace. At the palace he found Prabu Dewata Cengkar has angry, because his obedient Jugul not preparing any food for him.  Without scare, Aji Saka goes to the front of the king and surrenders himself as a prey.

“Forgive me Her Majesty, I am Aji Saka.  If pleasure, I am ready to be your prey for today,” said Aji Saka.

The king is very happy to hear that, and without patient he instruct his obedient to catch and cut the body of Aji Saka to cook.  When Jugul want to catching Aji Saka, Aji Saka move downward one step, and he said: “Forgive me Her Majesty, before this, I have one request.  I beg you for a reward a piece of land same spread with my turban,” Aji Saka said and pointed his turban on his head.

“That’s all young man! Are you not asking for more wide of land?” the King asking to Aji Saka.

“It is enough Her Majesty, that’s all,” Aji Saka answer the king question strictly.
“OK young man! Before I eat you I will give you what you request to me,” said the king.
And then Aji Saka taking his turban from his head and given to the king.

“Forgive me Her Majesty, to avoiding any falseness, it is better if You Her Majesty scaled this turban ,” said Aji Saka.
Prabu Dewata Cengkar agreed, slowly, he step downward and to let run out the turban.  But that is strange, every time he let run out the turban, the turban become more longer until covering all the area of his Kingdom.  He didn’t realize that, because he is too happy to have a young victim.  He continues and he doesn’t realize that he already in the beach of Southern area and he goes to the sea water, and, Aji Saka  to let run out the turban. When Prabu Dewata going to the middle of the sea, Aji Saka suddenly to pull at his turban.  Prabu Dewata falls to the water and at the same time he changes to be a white crocodile.

One day Aji Saka to call Dora to see him, and he instruct Dora to go to Kendeng Mountain to see Sembada and asking Sembada for His Keris.

“Dora! Go to Kendeng Mountain to meet with Sembada, told to him that I instruct you to take my Keris. ” Aji Saka as a new king instructed Dora.

“Yes His Majesty!” said Dora and he is going to the Kendeng Mountain.

After walking for a view days, he arrive at Kendeng mountain.  When those two friends meet they are embrace to release their longing. After that, Dora tells about his visit to meet Sembada.

“Sembada, my friend! Master Aji Saka has to be a new King for Medang Kamulan. He sends me to see you to take his Keris to bring to the palace,” said Dora.

“No, my friend! The master has order me to not given the Keris to anybody except he himself coming and taking that,” said Sembada clearly.

Dora persist to take the Keris because he feel he responsible to do the instruction from his master, he must take the Keris from Sembada hand.  Both of two friends keep on their standpoint, they have their responsibility to their master.  They think it is better die than betraying the master, and they fight until both killed together.

In the mean while, Aji Saka has restless waiting for Dora coming from Kendeng mountain bringing his keris.

“What happen with Dora? Why until now she is not back yet?” Aji Saka said to himself.

After two days waiting, and Dora never came. Finally, he decided to look after his servant to the Kendeng Mountain alone. He is very surprise when he arrived and found both of his loyal servants has died. They killed because of their loyalty to him. To remember of their loyalty Aji Saka creating a words (Javanese words) knowing with the term dhentawyanjana, that tell a story about the fight among two of his servant who have supernatural power and killed together.

The words also knowing as carakan.

The composition of the words as follows:

The Javanese script, natively known as Hanacaraka or Carakan is the pre-colonial script used to write the Javanese language.  As of 2008 Javanese is difficult to render on a computer, though the script was added to Unicode in version 5.2.

This site uses Akismet to reduce spam. Learn how your comment data is processed.

Most of product on this site contains nicotine. Nicotine is an addictive chemical.

If you are under 18, please leave.

All archive files are copyright of the original owner .